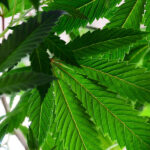 The origins of Amherst Sour Diesel are unknown. There is a rumor spreading that this cultivar was developed by the Californian seed bank Huboldt Seeds. This cutting was a cross between the Chemdog and an Amherst Super Skunk. The Chemdog line came from “bag seeds” that appeared at a The Greatful Dead concert and as there were several of them there are now three original Chemdog phenotypes. The Chem 91, Chem # 4 and the Chem D. This so-called “Chemdog family” has significantly influenced modern canabis genetics in the last 30 years, as many modern varieties are derived from these plants. Amherst Sour Diesel is one of them. Although this strain is rated 80% Sativa, this cutting has strong indica recessive traits and a pungent diesel aroma that goes through walls. A true diesel variation that beguiles with its dark green tones. The smell of this plant is strong like gas, paired with lime and frankincense.